By Gregory Adams
Published Jun 13, 2014
Hype has been building over California rapper Ab-Soul's upcoming These Days LP via a series of pre-release leaks featuring the likes of Schoolboy Q and Action Bronson. Now, ahead of the album's June 24 street date via Top Dawg Entertainment, a final tracklisting has arrived to confirm that it will also feature appearances from Kendrick Lamar, Rick Ross, Danny Brown and more.

An image of the record's back cover art surfaced on Twitter earlier today (June 13), and it details guest appearances and production credits for the 15-song effort. In addition to the Schoolboy Q-assisted "Hunnid Stax", various members of the TDE family pop by on These Days. SZA and Isaiah Rashad show up on Purity Ring-produced opener "God's Reign," Kendrick Lamar drops by for the self-explanatory "Kendrick Lamar's Interlude," and Black Hippy bud Jay Rock appears on "Feelin' Us," along with Ravaughn.

Previously previewed single "Stigmata" featured bars from Action Bronson, but other heavyweights that show up on the LP include Rick Ross ("Nevermind That"), Danny Brown ("Ride Slow") and Lupe Fiasco ("World Runners").

It should also be noted that the tracklisting makes a point of separating full on features from minor guest vocal appearances. Contributing to tracks in some fashion are Joey Bada$$, Mac Miller, Jhene Aiko, Puff Daddy, BJ the Chicago Kid and Earl Sweatshirt, among others. Production-wise, the record is also fit with beats from J. Cole, Larry Fisherman (aka Mac Miller), Tae Beast, Sounwave, Terrence Martin, Rahki, Skhye Hutch and more.

You'll find all of the info via the back cover art down below, where you'll also find the newly leaked "These Days." You'll note that the track, driven by Ab-soul's bars as much as by the O'My's gospel soul harmonies and bluesy guitar work, doesn't appear on the tracklisting to the upcoming album of the same name. 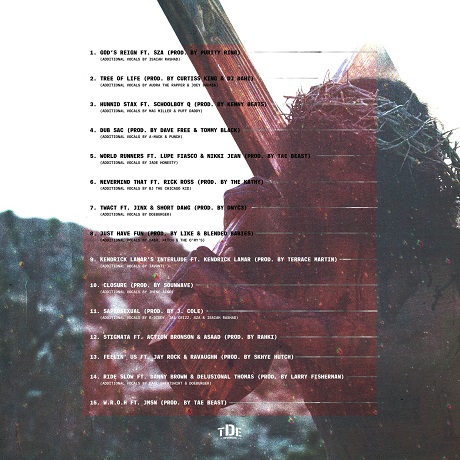