By Josiah Hughes
Published Sep 21, 2016
Netflix continues to take over the world as they suck us in with their Marvel heroes and adorable '80s children. They've been quite open about how they use data to determine their programming, and today the streaming service has unveiled exactly when we tend to get hooked on their shows.

The company has unveiled an infographic explaining exactly which episode sent you into a tumbling downward spiral of binge-viewing. For some shows, like Stranger Things, it was the second episode that got most users hooked. Meanwhile, others were slower burns. For example, newcomers to Lorelai and Rori's delightful dynamic on Gilmore Girls took 7 episodes to get addicted.

Check out Netflix's infographic of what got you hooked below.

The company is also far from finished with rolling out new, original material. According to Variety, their CFO David Wells is hoping to have half of Netflix eventually become original content.

"We've been on a multiyear transition and evolution toward more of our own content," he said at Goldman Sachs' Communacopia conference. The goal is to have 50 percent of their content be original, a goal that they've already achieved one-third of the way.

The original programming doesn't all need to be mega-successful, either. "We don't necessarily have to have home runs," he said. "We can also live with singles, doubles and triples especially commensurate with their cost." 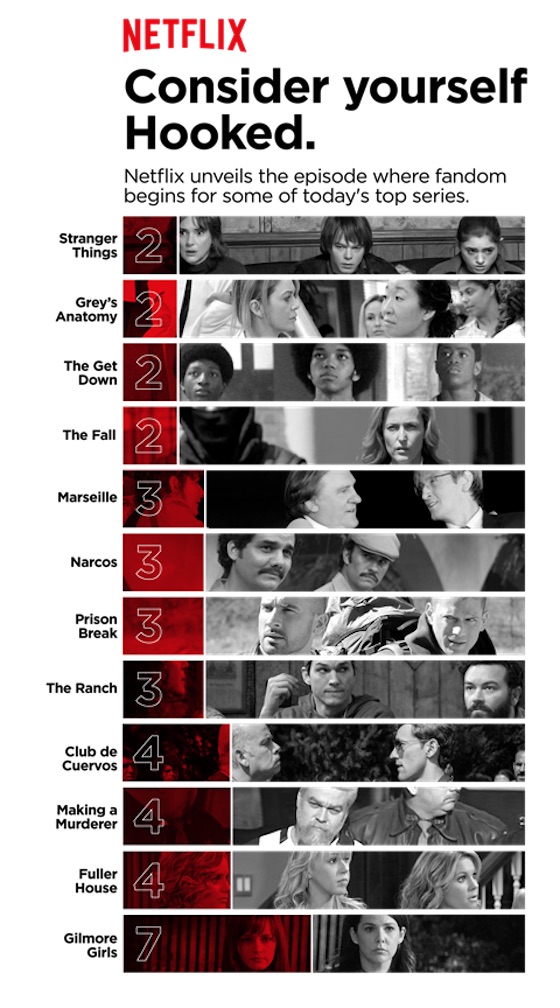