And of course it's going to cost you more

By Brock Thiessen
Published Jul 04, 2018
Binge-watching might soon be getting all that easier — and expensive — as Netflix is reportedly testing out a new, pricier "Ultra" subscription tier.

According to a report from TuttoAndroid [via CNET], this "Ultra" tier would cost more than Netflix's currently offered highest tier, "Premium," which is $13.99 here in Canada and the U.S. Right now, this "Ultra" tier is being reportedly just being tested out in Europe.

The new tier would now offer up to four simultaneous 4K streams at once, though that's something you already get via the "Premium" plan, The Verge points out. So it seems that the real perk of the "Ultra" tier would be to get HDR video — something that is not currently often in the top "Premium" tier.

However, it could also mean that current "Premium" perks could be removed and shifted over to "Ultra."

According to TuttoAndroid, the "Ultra" tier could cost €16.99 a month, with the price tag in North America then likely being $16.99. The Verge points out that the new tier is also currently being tested in Germany, with price points being €16.99 and €19.99.

At this point, Netflix's exact plans for this proposed "Ultra" tier are obviously a bit unclear, but you can see a current breakdown of how it might work below courtesy of TuttoAndroid. 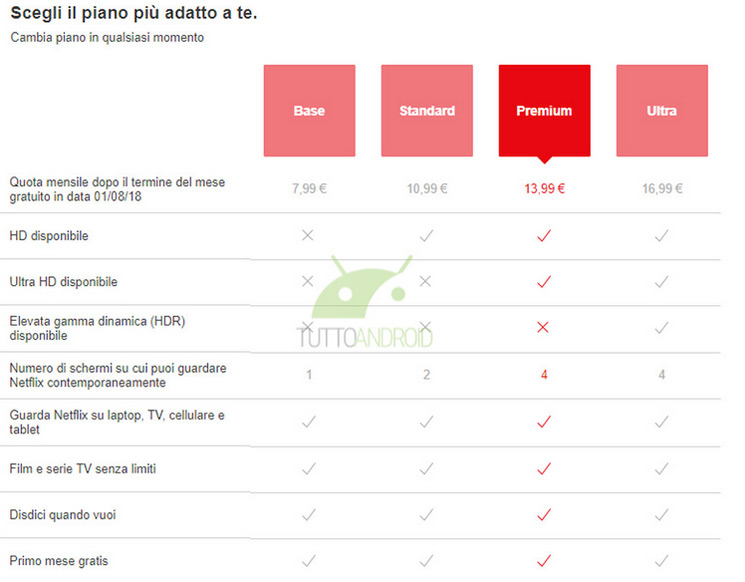