By Allie Gregory
Published Jan 11, 2021
The Chilling Adventures of Sabrina aired its final season this month, and in promoting its newest episodes, Netflix fired off a tweet this weekend that landed the streamer in some hot water.

Yesterday (January 10), a social media rep posted photos of the cast covered in fake blood, captioning the tweet "Sunday Bloody Sunday." Twitter users quickly responded to the problematic use of the phrase, which most notably refers to the 1972 massacre in Northern Ireland that resulted in the death of 14 people.

As one user put it: "One of the darkest days of Irish history is NOT a punchline for Americans. Many of us come from families personally affected by the events of the troubles. You wouldn't have joked about 9/11. Don't joke about that." 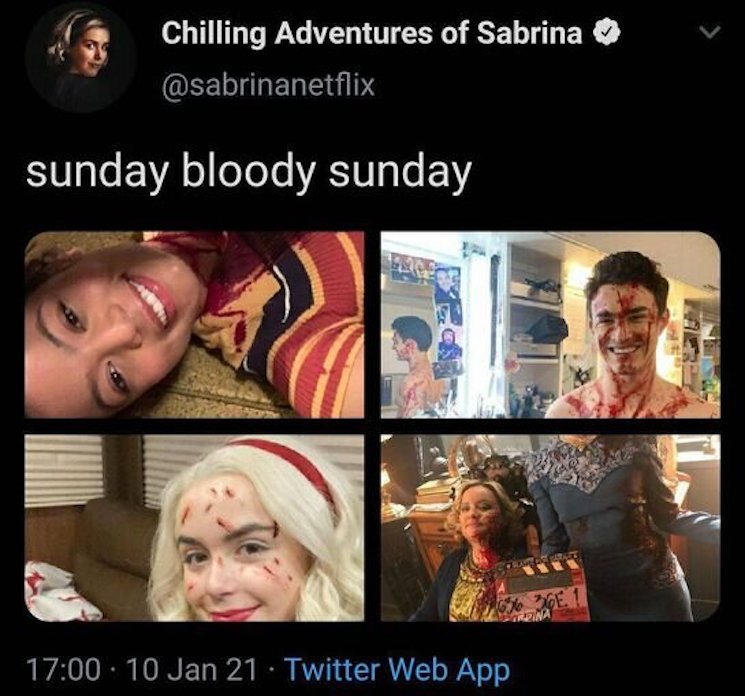 The streamer has since deleted the tweet and offered an apology for the oversight [via Deadline]:

"Our tweet was unacceptable and has since been removed," a spokesperson said. "We are very sorry for the hurt and distress it caused."

See some of the reactions to the original tweet below.

Admit it... You just thought Bloody Sunday was the title of a U2 song, didn't you?

Really encapsulates the frustration of a Sunday doesn't it?

I think at least someone behind this account should perhaps look at the replies and maybe Google 'Bloody Sunday'.

I almost feel sorry for the social media team who clearly scheduled this post to go out on a Sunday, when no one was working, and who is coming in to a complete shit show today. Almost. pic.twitter.com/lLM0HN1X0i