'The Evil Dead' Soundtrack Gets Reimagined for New Vinyl Release

By Brock Thiessen
Published Jun 04, 2018
The Evil Dead stands as one of horror's most iconic films, so it makes sense that its equally iconic score would be dusted off for a 2018 release.

Mondo/Death Waltz have announced they have teamed up with the film's original soundtrack composer Joe LoDuca to present The Evil Dead - A Nightmare Reimagined.

As you could perhaps guess from that title, the reissue is not a straight-up repressing of the original soundtrack for Sam Raimi's 1981 horror classic, but rather a fully re-recorded and expanded version by LoDuca of his original film score (which actually first arrived in 1984).

In a press release, Mondo explained, "Joe LoDuca went back to the drawing board to fully re-record and expand his original score to The Evil Dead with absolutely terrifying results. The record you hold in your hands manages to keep the essence and familiarity of the original score yet feels completely new and exciting due to the addition of all new music combining the classic and the contemporary."

Up above you check out the newly done artwork by Graham Humphreys, while below you can see the vinyl of the 2-LP set, which comes on Kandarian Demon vinyl (a.k.a. green, yellow and purple swirl with red splatter). The release also comes with a Necromonicon booklet featuring liner notes from LoDuca, Evil Dead star Bruce Campbell and Robert Tapert. It includes download card as well.

The Evil Dead - A Nightmare Reimagined goes on sale Wednesday (June 6). For now you can listen to the entire release, down below.

In a statement, LoDuca said, "Evil Dead was my first film commission. As fate would have it, this is the movie that has the most enduring impact on generations of fans. Every few years I get a request to release the score and my response is the same — I own the score, but not the recording rights. So when I was last approached to reissue the score, I asked myself this question: Knowing what I now know, how would I write for that ensemble today? I am happy that I did. Welcome to my nightmare: reimagined." 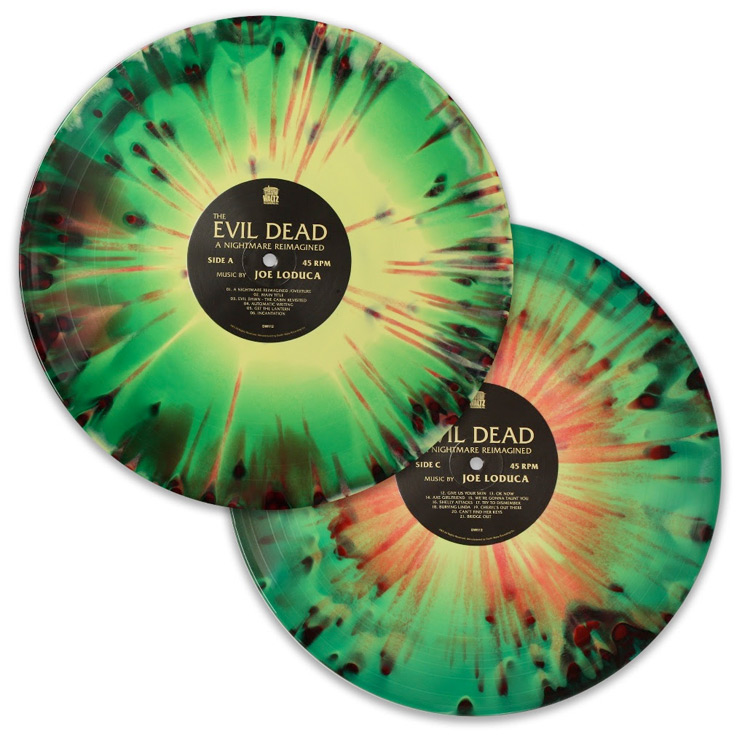