By Josiah Hughes
Published Jan 07, 2016
Netflix and Marvel are two of the biggest properties in media, and now that they've joined forces they seem somewhat unstoppable. After impressing once again with Jessica Jones, the two parties are ready to bring us the second season of their hit show Daredevil.

Netflix just announced that the show will debut its second season on March 18. They also shared a poster and a teaser for the show, both of which are available below. The teaser follows a trailer for the second season that was released last fall.

There are some changes in store for the second season of Daredevil. For one thing, the show will introduce Elektra and the Punisher as characters (to be played by Elodie Yung and Jon Bernthal, respectively).

The show also has new showrunners for its second season. Drew Goddard, who helmed season 1, has moved on to Marvel movies, with Doug Petri (Buffy the Vampire Slayer) and Marco Ramirez (Sons of Anarchy) moving in to take his place.

Daredevil and Jessica Jones are just two of five Marvel series that Netflix has planned. The other shows are Iron Fist and Luke Cage, all of which will be followed by The Defenders series (which sees all of the characters teaming up).

Thanks to The Hollywood Reporter for the tip. 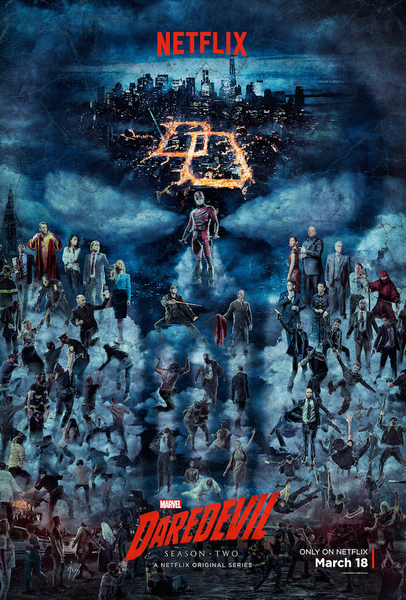