The 3-foot suspect was wanted for kidnapping and his race was listed as "Other: Doll"

By Brock Thiessen
Published Feb 03, 2021
While an Amber Alert is hardly ever a joking matter, one such missing-child emergency alert had Texas residents recently looking out for a knife-wielding 3-foot-tall Chucky doll.

Yes, believe it or not, the Texas Department of Public Safety actually sent out an Amber Alert asking residents to keep an eye out for the evil doll from Child's Play, as the mean lil' mofo was said to be a suspect in a kidnapping.

According to the alert, Chucky and his son Glen Ray were both featured in an Amber Alert blasted out on people's phone last Friday (January 29), multiple news outlets report. And the Amber Alert was sent out three freakin' times.

The alert described the suspect as being named Chucky, who was listed as being a 28-year-old with red, auburn hair and blue eyes who stood 3'1" and weighed 16 pounds. Amazingly, his race was listed as "Other: Doll."

The missing child, meanwhile, was named Glen, who Child's Play stans will know appeared in the 2004 film Seed of Chucky.

And just in case this is all too wild to believe, there's a screen shot of the alert below. 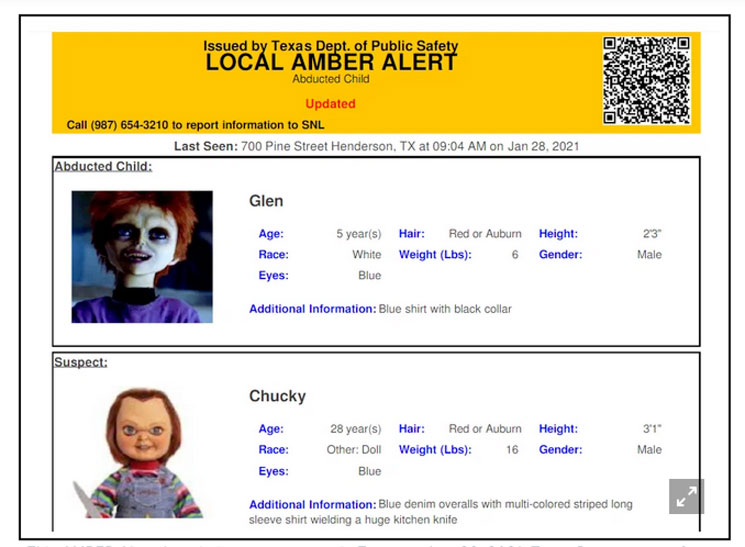 So what the hell happened? Well, the Texas Department of Public Safety has come forward to explain it was a "test malfunction."

The department stated: "This alert is a result of a test malfunction. We apologize for the confusion this may have caused and are diligently working to ensure this does not happen again."

And while it does seem like a legitimate mistake, the whole incident sure does seem like some sort of twisted and seriously misguided publicity stunt for the upcoming Chucky TV show.