By Josiah Hughes
Published Jul 03, 2018
Later this month, Vancouver will be treated to the second edition of the CURRENT Symposium. The multifaceted feminist electronic art event will include five days packed with programming, including contributions from musicians, filmmakers, performers, community leaders and activists.

The stated theme of the festival is "Dream of a New Future," which involves thinking beyond the white male-dominated structures of the arts scene. As a result, all of CURRENT's performers are women and non-binary people.

Alexandra Chen, who co-produces CURRENT alongside Ashlee Luk, Nancy Lee and Soledad Muñoz, explains that the event is still very much open to anyone who wants to attend.

"We encourage people who don't identify as such to attend as well, while noticing the space they are taking and have been invited to," Chen tells Exclaim!

Chen explains, "Sound-wise, we wanted to highlight genres beyond techno and house music which can traditionally be associated with electronic music, and focus on pairing international talent with rising local talents to support and encourage an interesting burgeoning scene."

In addition to Chen, Exclaim! caught up with co-producer (and scheduled performer) Soledad Muñoz for more information on CURRENT's upcoming event. Read the full interview below. 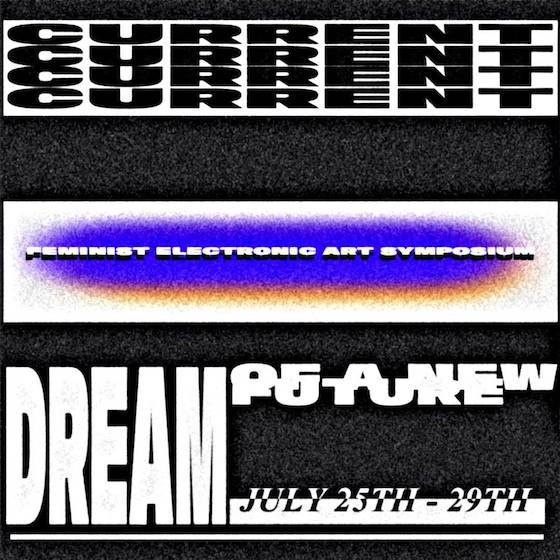 What was the impetus to start CURRENT Symposium? When was it founded?

We started CURRENT: Feminist Electronic Art Symposium because we felt there was a gap in the music and electronic art community that needed to be filled. Therefore, we wanted to create space for our peers who are women and non-binary artists — and ourselves — as practicing artists and musicians.

To uninitiated outsiders, experimental electronic music might seem like it has been a traditionally progressive or inclusive sphere. In what ways is it not?

Having been practising and studying in the North American electronic art and music community for many years, I disagree with that. I think that art in general has a reputation of being "inclusive" because it is within the realm of social and cultural practices, but as with many other areas in our society, it is overwhelmingly white and male dominant. It is present in DIY culture to A/V, film and sound and tech industries in general. Even at an academic level, the disparity between white male professors and women and people of colour in the sound and audiovisual departments is overwhelming. The fact that every aspect of the electronic art sphere is dominated by one demographic and still can be seen as progressive is one of its biggest obstacles for minorities today, because although things seem to be changing at a worker, student or artist level, the higher levels continue to be stagnant.

The theme is "dream of a new future" — can you extrapolate on that a little?

This theme resonates with us because we are trying to create the world in which we want to exist in. Continuing from the previous question, I think that "inclusion" alone is not the solution in order to create a more equal society, since it supposes a preexisting norm which has to include us. We as a team, believe in a complete structural change through intersectional feminism. Therefore our goal is not only to showcase talent, but to also plant seeds with workshops and come up with policy recommendations for the City of Vancouver in our panels. This way, the less represented in the electronic arts realm today can not only be present today, but in charge in the future.

Aesthetically, is there an overarching sound of your performers? What was the criteria to play?

One of the most important things of feminism is to find equity in difference. The fact that the world of electronic arts is dominated by one demographic has developed into a audiovisual monoculture. As there are many currents in a stream, our project focuses on giving voice to many different women and non-binary folks. That being said we have thoughtfully constructed the rhythm of each evening in order to make a cohesive showcase. When it comes to other mediums, we have partnered with GENA in order to facilitate a film showcase, and FIELD Contemporary gallery to hosting "Tone", an investigation of the sonic and gestural nature of words. Therefore, the criteria is women and non-binary people in the electronic arts, which can go pretty far.

Vancouver has famously had so many problems with its venues. Was it difficult to find spaces for this event?

Additionally, I think it is important to highlight why is is so hard to find spaces. Not only are we affected by the increasing price of housing in the city and effects of large entertainment companies coming in to our community, but also by the lack of representation in some DIY spaces, which have stubbornly been supporting all white male or "one token" lineups for years.

Tell me about the panel discussions at the symposium.

We will be hosting three panels: Intersectionality in Electronic Music & Art, On Producing Safer Spaces: Accountable Culture Creation, and Post-"me too": On prevention and Support. These panels are made possible by the support of the City of Vancouver Host Your Own Engagement Grant which is meant to create more dialogue to shape the future of Vancouver's creative ecology. These panels are meant to be an opportunity for knowledge exchange and a way to stimulate thought on these topics; the audience can sign up for post-panel engagement sessions in August/September which will allow deeper local community input, in order to diversify the local knowledge pool working with a policy translator and facilitator. We are hoping to amplify the voices of the people most affected by these topics and those of who are already doing work in the fields of intersectionality, human resource training for arts and cultural organization, decolonization training, and women's support organizations. The discussions of these panels and the post engagement meetings will directly result in policy recommendations for our city.

Who is the ideal demographic that you would like to attend CURRENT?

We are hoping that everyone who enjoys art, electronic music, sound-art and film can attend. Although our workshops are focused on women and non-binary folks, the symposium is designed to accommodate in one form or another all ages, different mediums and genres, and all venues are wheelchair accessible.

Is there anything else we need to know about CURRENT?

All workshops, screenings, panels and lectures are free or by donation, including a lecture and performance by Maria Chavez, who is opening the Symposium on Wednesday 25th. We will also be releasing a publication in conjunction with the Vancouver Art Book Fair for our show at Field Contemporary, which will include text by Jamilah Malika, Contrast Collective and myself.

Finally if anyone want to volunteer, or check out our full lineup, schedule and list of partners, visit our website.
View Today's Trending Tickets