By Sarah Murphy
Published Aug 10, 2017
Taylor Swift has long been a recurring character in show biz drama involving the likes of Kanye West and Kim Kardashian, as well as Katy Perry (but not Kendick Lamar), though in recent days, she's turned her attention to more serious allegations.

Swift is currently fighting former radio DJ David Mueller in court, alleging that he groped her during a pre-concert meet-and-greet in Denver in 2013.

The story went public after Swift requested that Mueller be banned from attending her future concerts, and Mueller later lost his job. He instigated the legal battle, suing the pop star for $3 million USD in damages. Swift countersued with allegations of sexual assault, merely asking for a symbolic $1 settlement.

Swift took the stand today (August 10), testifying that Mueller deliberately reached under her skirt and grabbed her backside during a photo-op with the former DJ and his girlfriend Shannon Melcher.

"He stayed attached to my bare ass-cheek as I lurched away from him," Swift said in court. "It was a definite grab. A very long grab."

She claims that she didn't address the incident with Mueller at the time or cancel the remainder of the event because she didn't want to disappoint the other fans waiting in line to meet her.

She also said a member of her security team, Greg Dent, witnessed Mueller lift her skirt, but no one could have seen the alleged groping because their backs were against a wall. She went on to argue that someone would have had to have been underneath her to see the actual grab, "and we didn't have anyone positioned there."

UPDATE (8/11, 2:30 p.m. EDT): Swift's former bodyguard Greg Dent has now testified in the case. He told the courtroom, "I saw his hand under her skirt.... Her skirt went up.... She jumped." Dent added, "I was definitely sure that he had been drinking. I don't know what level. He wasn't staggering or falling down."

UPDATE 2 (8/11, 9:50 p.m. EDT): The judge has now dismissed Mueller's complaint against Swift. "Taylor Swift did not act improperly," Judge William J. Martínez said. He added that Mueller had provided "insufficient evidence Miss Taylor Swift acted improperly when she reported an assault she truly believed happened" and there was not enough evidence to proceed to a jury hearing.

Swift's mother, Andrea Swift, and one of her managers, Frank Bell will remain in court. Mueller alleges that they pressured the radio station he worked at to fire him following the alleged groping incident. A jury will decide whether the complaints issued to Denver's KYGO by Swift's mother and Bell were "improper."

Mueller, meanwhile, maintains that his hand touched her skirt when he placed his hand on Swift's ribs, and then their arms got crossed. "My hand was at rib-cage level and apparently it went down," he said.

A photo from the 2013 encounter is pictured below via TMZ. 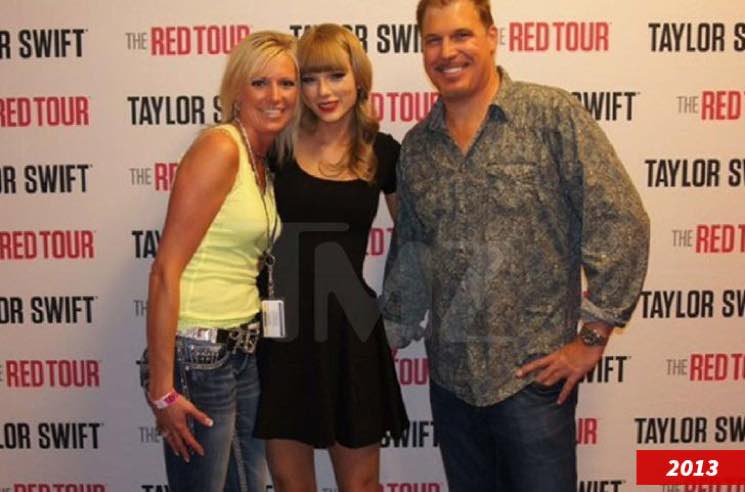 Swift's mother testified yesterday (August 9), telling the courtroom that her daughter was "really shaken" and "humiliated" by the incident. When Mueller's lawyer asked why they didn't immediately contact police, she replied: "I did not want this event to define her life. We absolutely wanted to keep it private, but we didn't want him to get away with it."

The case remains underway in federal court in Denver.

Dive into Taylor Swift's back catalogue via Umusic.