By Alex Hudson
Published Jun 13, 2014
The 2010 music video for Rihanna's video "Rockstar 101" begins with a shot of the the words "rock" and "star" spelled out in neon tubes, the latter word dangling from the former with a tangle of wires. Now, four years later, RiRi is being sued over this image.

The lawsuit comes from American artist James Clar, who frequently works with neon light. The piece in question is the 2006 work You & Me, which features the illuminated word "me" dangling down from the word "you," spelled out with electrical ballasts. It's not clear if Rihanna or anyone from her team had seen the work, but there's a clear similarity.

You can see a still from the Rihanna video above and an image of Clar's You & Me below.

The Art Daily News [via artnet News] reports that Clar filed a complaint at Paris' Grand Instance Court. Apparently, French laws on plagiarism are a little more stringent than in the U.S., which possibly explains why he didn't file the suit in his home country. Ostensibly, Clar is filing in France because it was published on www.universalmusic.fr.

All in all, this story is fairly similar to the time Rihanna was sued by photographer David LaChapelle in 2011 for allegedly plagiarizing his work in the video for "S&M." That case was settled out of court. 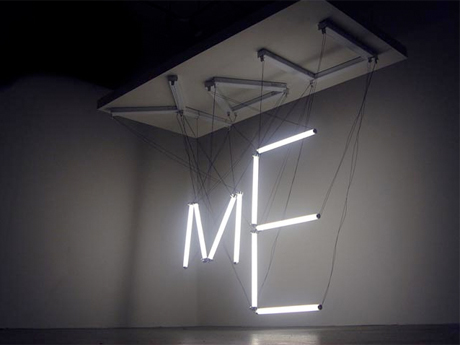