Since 2007, Hip-Hop Karaoke Toronto has handed a mic and a spotlight to anybody willing to belt out their go-to banger to a room full of strangers. Inspired and awe-struck by New York City's seminal event (itself brand new at the time), the Toronto edition's founders set out to recreate it for an audience north of the border. Armed with crates and binders full of instrumentals for hip-hop's mightiest and most beloved tracks, DJs Dalia (Dalia Cohen), Numeric (former Exclaim! Art Director Noel Dix), Ted Dancin (Luke Ballon) and emcees More or Les (Les Seaforth) and Abdominal (Andy Bernstein) staked Kensington Market's the Boat as its first home.

To celebrate, we're telling the story of ten years of Hip-Hop Karaoke, with help from the characters that made it happen.

"We spent hours going through our records, digitizing the instrumentals, printing up and editing song lyrics and alphabetizing them in binders," says DJ Dalia. "We started with something like 600 songs; half on vinyl and half on Serato."

Over the course of a night, anybody could walk in off the street and do their best KRS-One or form an ad hoc cypher to take on the Wu-Tang Clan. Performers were handed lyric sheets (if they actually needed them), the DJs cued up the instrumentals and Les and Ab played the hype men. It was a simple formula, and it worked. Three months in, word spread across the city and the crowds ballooned to a much larger size than the Boat could support.

"People were showing up three hours before doors to guarantee a spot on the mic," says Les. "Not a bad problem to have, but still a problem."

The other problem — one the event's organizers moved on immediately — was the reoccurrence of the n-word in much of the hip-hop catalogue.

"One night, an inebriated young [Caucasian] man came up to perform Wu Tang Clan's 'Triumph,'" Ab relates, "and before he even started rapping, he yelled out ODB's very n-bomb-laden intro, which, although technically correct, was also obviously hugely awkward and offensive coming from him."

That and an unfortunate freestyling session necessitated the creation of Hip-Hop Karaoke's two cardinal rules:
1. No use of the n-word, no matter who you are. Replace it with "sucka" or another non-epithet.
2. No freestyling.

"8 Mile was only a few years old," offers Ted Dancin. "I guess people were still feeling the effects." 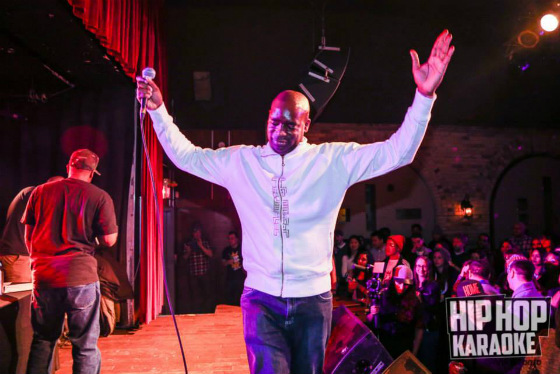 Otherwise, Hip-Hop Karaoke Toronto was a huge success. By 2008, the event began a search for a larger home, and after a three-month stint at the Gladstone, they finally settled at Little Italy's Revival. With an over 400-person capacity and pro-level stage setup, Revival helped the event take shape as a slickly run, well-oiled machine. In 2009, they announced a headline guest for their second anniversary show: Canadian rap legend Maestro Fresh Wes.

"It never would have happened," claims DJ Numeric, "without the help of Wes's sister Mel Boogie. It was also the perfect fit for HHK because 'Let Your Backbone Slide' was one of the more popular tracks people would perform. It was also the first time we booked a guest ourselves."

The show was a complete sellout, but it was far from their last. Later years would see appearances from Lords of the Underground, Bahamadia, Das EFX, Black Moon, Del the Funky Homosapien and Black Sheep. The crew also came close to announcing appearances by Biz Markie, KRS-One, Big Daddy Kane, M.O.P. and Pharoahe Monch, but learned the excessive side of big star rider demands.

"Those '90s rappers," asserts DJ Dalia, "are not cheap, and they have some seriously crazy demands! Like first class tickets and a fleet of SUVs for everyone they are travelling with."

Hip-Hop Karaoke's reputation for being a DIY spectacle would earn them editions at Dundas Square and Harbourfront Centre for Canada Day, featuring exclusively Canadian content. In 2012, show regulars were invited as a warmup act for JUNO winners Michee Mee and Choclair at the Exclaim! 20th anniversary bash at the Horseshoe Tavern. The night peaked with Choclair providing his own verse on the regulars' rendition of "Northern Touch."

Yet, the crew still remember the show's fifth anniversary as its pinnacle. The bill had already booked legends Chip Fu (of the Fu-Schnickens) and Tribe Called Quest's now-departed Phife Dawg. On top of that, some last minute kismet brought Naughty By Nature down for a surprise appearance.

"Long-time HHK regular [and Toronto cosplay king] Sean Ward was showing them around town and told them their buddies Phife and Chip Fu were performing nearby," says Ab. "After a bit of coaxing, they agreed to do a little ten-minute impromptu set."

"I thought they would just hang out," adds DJ Numeric, "but they came on stage to say hello to the crowd. Vinnie wanted me to drop the instrumental for 'Uptown Anthem,' but I didn't have it with me — so Kay Gee busted out his gear and we got a mini Naughty By Nature set. The place went absolutely bananas!"

It was also something of a "through the looking glass" moment for the crew, as Phife's health issues took centre stage that evening.

"He was diabetic," explains Abdominal, "and suffered what he said was his first-ever onstage hypoglycaemic attack, mid-set. So he had to totally stop his performance, sit down on stage, and wait for the bar to send up some cranberry juice, in order to get his blood sugar levels back up."

"At the end of the show," adds More or Les, "Phife was sitting in the staircase leading up to the dressing room, looking forlorn about his performance. I had to say something, so I let him know that despite his challenges on stage, everybody loved it. The legend then gave me a cock-eyed look and said 'C'mon B! You kiddin'?! Thanks man, but c'mon!'" 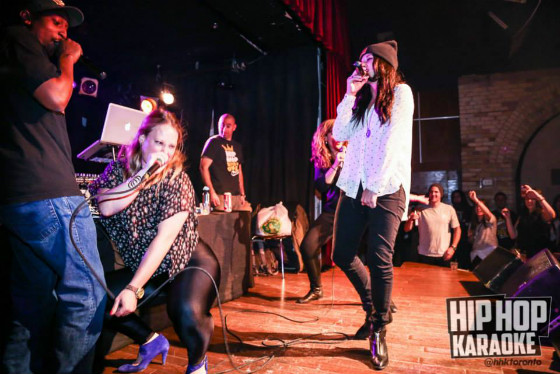 But as HHK grew and changed, so too did its founders. DJ Numeric left the crew to focus on his career; Dalia (who is married to Ted Dancin') retired from her role to focus on her career and raising her family; More or Les and Abdominal continued to work on and tour new material. The decision to call it a day was entirely mutual.

More or Les "personally started to feel a little burnt out with all the other things on my plate. It was time for a change — for all of us, I think."

Abdominal agrees: "We all wanted to see it reach the ten-year mark, but decided that would also be a natural point to end it. In the future we may do the event once or twice a year, but for all intents and purposes, we're ending it as a monthly party."

And so ends a legendary monthly party — or at least until February 17. But then, it was never really about the night so much as the people, and they're still around in Toronto, ready to show up at any future one-off Hip-Hop Karaoke nights.

"What was so unique about the night is that it was entirely dependent on who showed up and who signed up," says DJ Dalia. "If we didn't have such a diverse group of regulars with such talent and personality, we wouldn't have had the success that we had. The people who showed up to give it every month were just as fundamental to that night as we were — maybe more so."