By Josiah Hughes
Published Dec 27, 2018
Macaulay Culkin's dedication to ridiculous ideas is truly impressive. Now finished with his pizza-themed Velvet Underground covers, he recently revisited Home Alone (while also refusing to watch it). As if that weren't meta enough, he's now changing his middle name to, well, his own name. Yes, he's going to change his name to Macaulay Macaulay Culkin Culkin.

Last month, Culkin wrote on his blog that he was looking for a new middle name:

My middle name is something dumb. Larry? Orange? Honestly, I can't even remember it. So I asked you all to send in some better options so I can go down to the court house and explain to a judge why I need to change my middle name to something cool.

He then launched a poll asking fans what he should change his name to. He picked the top five results: "Shark Week," "Kieran," "TheMcRibIsBack," "Publicity Stunt" and "Macaulay Culkin."

As you can see, Macaulay Culkin won by a landslide: 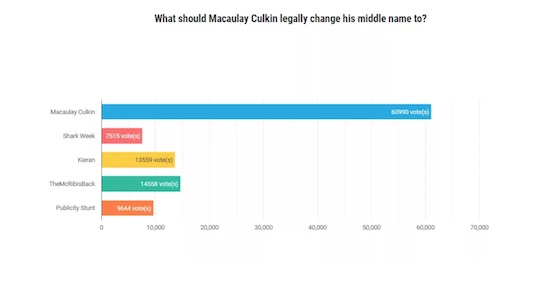 On Christmas Day, the future Macaulay Macaulay Culkin Culkin announced that he was going to follow through with the name change:

Merry Christmas to me, from all of you!

My new middle name has been chosen. You voted and the winner is clear.

It has a nice ring to it (if you like my name).#MerryChristmas