By Gregory Adams
Published Nov 01, 2013
If Jay Z's upcoming holiday collection with New York department store Barneys left a bad taste in your mouth, as it apparently did for many, wait until you get a whiff of this: the campaign now has a signature fragrance.

Jay Z's "Gold" will be unfurled at Barneys on November 20, a press release reveals, and comes packaged in a box that looks like a gold brick. This fits with theme of the other specialized pieces being made available at Barneys, which utilize a colour palette of black, white, gold and silver.

Apparently, the scent will feature "the brightness of Sicilian Bergamot and ginger warmed with Cardamom," though "masculine vetiver and teak wood mingle with the spice of pink pepper." The base scent has "rich amber and sensual myrrh" blended with "bourbon vanilla."

The press release also had this to add:

From the beginning of recorded history gold has been associated with royalty, purity and strength.

Gold is precious and valuable, a standard by which the value of other things are measured. As expressed in the gilded cap, GOLD JAY Z symbolizes SUCCESS, POWER, CONFIDENCE, COURAGE, STRENGTH and PRIDE.

A petition had surfaced last week asking Jay Z to back out of the campaign after a reported racial profiling incident had two black shoppers questioned by police over an assumption that they had stolen merchandise from Barneys. The rapper issued a statement noting concern over the incident, but wanted to hear all the facts about the case.

As such, he is going forward with the promotion to raise funds for his Shawn Carter Foundation, "a New York-based charity which awards post-secondary scholarships to students facing socio-economic hardships."

"I am against discrimination of any kind, but if I make snap judgements, no matter who it's towards, aren't I committing the same sin as someone who profiles?" he said in a statement. "I am no stranger to being profiled and I truly empathize with anyone that has been put in that position. Hopefully this brings forth a dialogue to effect real change." 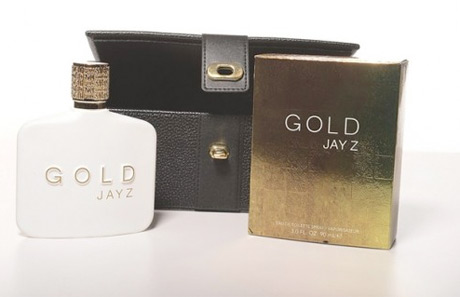