By Alex Hudson
Published Feb 21, 2014
Yesterday (February 20) would have been Kurt Cobain's 47th birthday, and the late Nirvana star's hometown of Aberdeen, WA, celebrated the occasion by unveiling a statue of the man himself and declaring it Kurt Cobain Day. Is the statue any good? Well, we'll let you decide that for yourself.

As you can see, the statue shows the singer with a guitar perched on his knee while crying a single tear.

It was carved by artist Randi Hubbard, and it's not actually new. Reports about the statue date back 20 years, to shortly after Cobain's death, when the artist began creating it in her husband's muffler shop. Reports over the years indicate that it was available for viewing when the shop was open.

Now, it's been embraced by the city and placed in the Aberdeen Museum of History.

You can get a good look at it in the two local news reports below, one of which comes from KOMO News and the other from KING 5. Be forewarned that KING 5 focuses incessantly on Cobain's drug habit and personal problems while completely ignoring his musical legacy.

Thanks to Consequence of Sound for the tip. 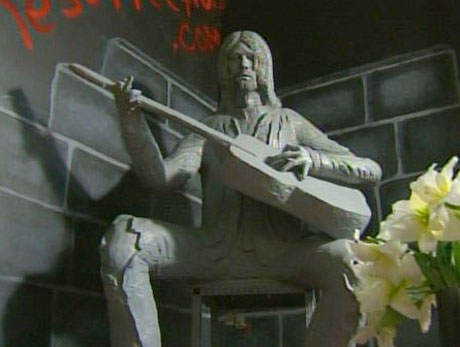