By Alex Hudson
Published Sep 15, 2015
When Jack White first arrived in the mainstream circa 2002, he seemed like an outsider. Although the White Stripes weren't the only garage rock band to emerge in the early years of the new millennium — let's not forget the Strokes, the Vines and the Hives — they stood out from the pack with their red and white colour scheme, bass-free minimalism, and primal approach to garage-blues. It was an ascent that recalled the golden age of grunge, in which indie rock oddballs were scooped up by a major label and then embraced by a mass audience.

Now, 13 years later, Jack White stands as one of the world's leading torchbearers for rock'n'roll. Although the White Stripes went on hiatus in 2007 before officially folding in 2011, Jack managed to forge a successful career outside of the group. He has founded new bands, released solo records, acted in movies, moved from Detroit to Nashville, and launched his own label/store/studio Third Man Records. Far from being an outsider, the prolific polymath has now become a key part of the establishment; when rap mogul Jay Z unveiled his Tidal streaming service this past spring, White was named as a part owner and appeared at the launch alongside Kanye West, Rihanna, Madonna, Coldplay, Beyoncé and more.

On September 25, the 40-year-old musician will usher in the latest chapter in his storied career with the release of Dodge and Burn, the third album from his garage-noir band the Dead Weather (in which White is the drummer and occasional singer alongside vocalist Alison Mosshart, bassist Jack Lawrence and guitarist/keyboardist Dean Fertita). As we await that album's arrival, Exclaim! is looking back on the best releases of White's career with the latest instalment in our ongoing Essential Guide series. When Jack White teamed up with fellow Detroit songwriter Brendan Benson and the Greenhornes' rhythm section (bassist Jack Lawrence and drummer Patrick Keeler), it was the first time we had heard him backed by a full band. As co-writers, White and Benson bring out the best in one other, as Broken Boy Soldiers combines the the former's bluesy mood pieces (such as "Broken Boy Soldier" and "Blue Veins") with the latter's carefully crafted pop (as heard on "Hands" and "Yellow Sun"). Throw in the herky-jerky prog scorcher "Store Bought Bones" and the catchy radio favourite "Steady, as She Goes," and it all adds up to the most pop-friendly record White has ever made. With 10 songs in a concise 34 minutes, it's also his shortest album, making this a light and summery slice of fun. During the White Stripes' early days, the frontman was known for placing self-imposed limitations on the group: they employed a stubbornly minimal setup, wrote and recorded quickly and only on tape, and Jack reportedly dissuaded Meg from practising in order to preserve her raw drumming style. That stripped-down approach can be heard in its purest form on the band's self-titled debut, a ferociously raw garage rock record that laid the foundation for everything that has followed. Although subsequent records gradually expanded the White Stripes' palette and sharpened their songwriting, they never again achieved anything quite as primal as the the childlike caveman surge of "Jimmy the Exploder," as righteously angry as "The Big Three Killed My Baby," as blisteringly punky as "Broken Bricks," or as skin-crawling as "I Fought Piranhas." White had been a little rudderless since the White Stripes' final tour in 2007. He played in a couple of different bands, started Third Man Records, penned a James Bond theme, and served as producer on a pile of releases. Finally, it all culminated in Blunderbuss, a solo debut that encapsulated the breadth of White's sound, from his garage rock origins to his prog-inclined ambitiousness to the country influences he soaked up after moving to Nashville. Most excitingly, we finally got to hear White's musical vision in its most unfiltered form, without any bandmates or aesthetic guidelines. Given free rein in the studio, White ventured into atmospheric hip-hop on "Freedom at 21," pedal steel-flecked country on title cut "Blunderbuss," honky-tonk garage soul on "Missing Pieces" and freaky roots-prog on "Take Me with You When You Go." The record taught us that, removed from Meg and embracing a more traditional full-band setup, White's music is still grippingly one-of-a-kind. White Blood Cells is the album that brought the White Stripes into the mainstream, and deservedly so. It gave the band's raw, combustible sound a shot on the arm with some extra guitar layering, and it contains many of their catchiest songs. It opens with a few seconds of rustling in a room before a squeal of feedback heralds the monstrous fuzz riffs of "Dead Leaves and the Dirty Ground," making for a white-knuckle introduction; but then the very next song is "Hotel Yorba," a bubblegum country barnburner that showed that White knew his way around a sugary melody. This juxtaposition of menace and cuteness had always been a key part of the White Stripes' appeal, and this is the album where they truly learned how to harness its power.

On the one hand, they gave listeners the giddy punk sugar-rush of "Fell in Love with a Girl" and the lullaby-like "We're Going to Be Friends" — on the other, they assaulted speakers with the jagged "I Think I Smell a Rat" and the spooky "The Union Forever." And with the drum-and-vocal chant of "Little Room," White offered this manifesto for the band's minimalism: "Well, you're in your little room / And you're working on something good / But if it's really good / You're going to need a bigger room / And when you're in the bigger room / You might not know what to do / You might need to think of how you got started, sitting in your little room." With this major-label breakthrough, the White Stripes compromised nothing and proved that their little-room ideas were every bit as exciting in a much bigger room. In a recent study of Spotify data, a researcher found that the ninth most timeless song of all time — that is, the most listened-to song from 2005 of earlier — was the White Stripes' "Seven Nation Army." That song is habitually chanted in sports stadiums and has been remixed and covered on numerous occasions. Its anthemic main riff is a bit like the stop-claps from "We Will Rock You" — something that nearly everyone, even those with no particular interest in the song or artist, can recognize and replicate. While the success of "Seven Nation Army" is well-deserved, it was a bit of a fluke, since the White Stripes weren't aiming for arenas.

Like all of the 14 songs that make up Elephant, it's a fairly humble song with straightforward production that cleans up the band's sound without sterilizing it. The LP has everything that fans have come to expect from a White Stripes LP: searing punk ("Black Math"), pop-leaning whimsy ("I Want to Be the Boy to Warm Your Mother's Heart"), creepy balladry ("You've Got Her in Your Pocket"), an unexpected cover (Burt Bacharach and Hal David's "I Just Don't Know What to Do with Myself"), and allusions to the band's mythology (the familial love triangle of "It's True That We Love One Another," featuring guest singer Holly Golightly and some cheeky references to the rumour that Jack and Meg are brother and sister).

And while the bass tones heard on "Seven Nation Army" and "The Hardest Button to Button" may have momentarily seemed like a departure from the band's two-piece setup, they were actually created with a guitar and an octave pedal. In other words, the White Stripes were sticking to their guns just as they always had, and they delivered their most consistent and satisfying album in the process. When the duo explored new styles on subsequent albums, it was because they had already perfected their signature sound with Elephant. 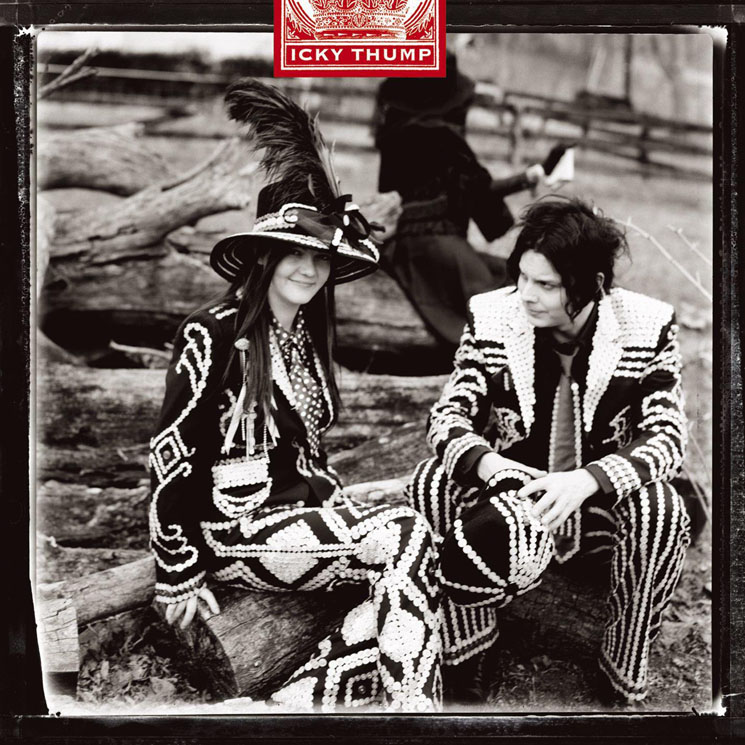 White's projects tend to be best in their pure, early form and then get a little stale over time. While the White Stripes' first four albums are all fantastic, the ramshackle folk and marimba-filled calypso of 2005's so-so Get Behind Me Satan are outside of their comfort zone. The 2007 swan song Icky Thump is a hit-and-miss affair, in which stellar tunes like "Icky Thump," "Rag & Bone" and "I'm Slowly Turning into You" must be taken alongside a gimmicky game of genre roulette that ventures into trumpet-blasted mariachi on "Conquest," highland bagpipes on "Prickly Thorn, but Sweetly Worn" and the cock-rock country of "You Don't Know What Love Is (You Just Do as You're Told)." These albums aren't stinkers, but the band's earlier work deserves more attention.

The Raconteurs similarly got too fussy with their sound, as they followed up Broken Boy Soldiers with the 2008 album Consolers of the Lonely, which is an overlong mess of overstuffed arrangements and spaghetti western silliness. The 12 studio LPs that White has released with his various principal projects are just the tip of the iceberg in terms of his total output. His catalogue is sure to give completists panic attacks, as his Third Man Records label has issued numerous albums in very limited editions, which have subsequently hit eBay at some frighteningly inflated prices. The label's Vault subscription service has become a vehicle for White to share a trove of exclusive curios, such as demo 7-inches and live albums from the archives. This has included a 2012 release of the White Stripes' first-ever show from 1997, entitled Live at the Gold Dollar. Also in 2012, the label issued White's Live at Third Man Records, containing full-band versions of a number of White Stripes songs.

Furthermore, White has a large catalogue as a producer. Early in his career, he helmed recordings for fellow Michigan garage rock acts like the Von Bondies, Whirlwind Heat and Soledad Brothers, and his first high-profile gig came when he produced and performed on country legend Loretta Lynn's outstanding 2004 album Van Lear Rose. Since then, some of his most prominent production credits include 7-inches from Beck and Insane Clown Posse, and albums from Wanda Jackson, the Black Belles and his ex-wife Karen Elson. He even produced comedy vinyl releases from Stephen Colbert and Conan O'Brien, respectively.

An interesting one-off is the 2003 soundtrack for the Civil War drama Cold Mountain, in which White acted in a minor supporting role. He performed five songs on the soundtrack, including traditional folk ballads that were in keeping with the tone of the 19th century period piece. Particularly notable is his tender original folk tune "Never Far Away."