By Gregory Adams
Published Aug 29, 2013
Brooklyn's Cults kept the announcement of their sophomore set Static pretty cryptic earlier this summer, but the pop duo have now let loose the LP details in full.

Including previously premiered first single "I Can Hardly Make You Mine," the album features 11 new numbers, and is described in a press release as a "breakup album." It should be noted that project founders Brian Oblivion and Madeline Follin were romantically involved when they formed in 2010.

Of the record, Follin said in a statement: "There's a feeling our generation has. The feeling there's always something better around the corner, that everyone is born to be a star. The feeling that life is waiting for you, and yet it's not happening. All of that is static."

Also revealed today (August 29) were two separate versions of Static's cover art. The first, which you can see above, is quite similar to Cults' self-titled 2011 debut and features Oblivion and Follin wiggling their wild manes, presumably mid-song. This cover will be used for the digital and CD editions, while an image of a fuzz-displaying TV screen, which you can see below, will grace the vinyl version of Static.

As previously reported, Static arrives October 15 through Columbia and will be supported by a North American tour. You can see the show schedule, including stops in Vancouver and Toronto, over here. 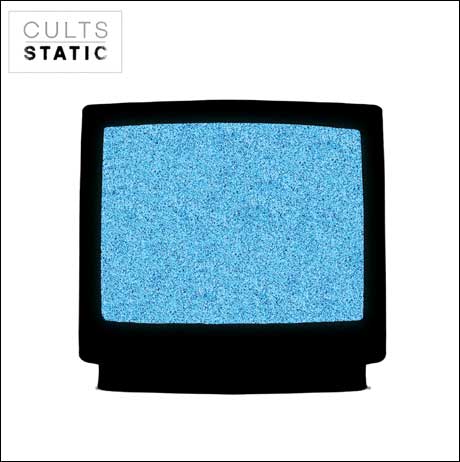