By Josiah Hughes
Published Feb 16, 2016
Toronto metal trio Cauldron were deep into their North American tour with Enforcer, Warbringer and Exmortus when they got into a serious van accident. They've since been forced to cancel the remainder of their tour.

The band was en route to New Orleans when their van collided with debris from a previous car accident on a highway near Dallas, TX, on Sunday (February 14). The van rolled over several times and eventually stopped on its roof. You can see a photo of the ruined vehicle below. 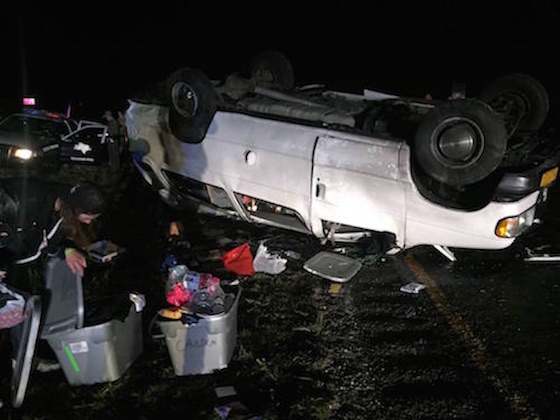 While all three members survived the crash, guitarist Ian Chains was hospitalized with broken bones in his neck and back. As a result, Cauldron have been forced to cancel the remaining six tour dates of their two-month trek.

The band issued the following statement about their situation:

Sorry to report the unfortunate news of our accident (not at fault [by the way]) on the highway in Texas last night and that we will have to pull out of the remaining eight tour dates. Ian [Chains, guitar] is recovering in hospital and is expected to make a full recovery, otherwise everyone is going to be okay. We are just happy to be alive at this point. Thanks for your support and to our tour mates Enforcer, Warbringer & Exmortus; we had fun and wish you all the best. Hope to see you all again soon.