By Brock Thiessen
Published Mar 01, 2019
In many ways, the Cruising soundtrack is the thing of legend, especially when it comes to punk history. This is thanks to L.A. punk heroes Germs recording an entire session for director William Friedkin's 1980 Al Pacino-starring film — only for the recordings to then be essentially shelved and go unused. At long last, though, Germs' complete Cruising recording session will see the light of day thanks to an extensive and hugely expanded soundtrack reissue by the tireless Waxwork Records.

The soundtrack hub has announced the ambitious Cruising Original Motion Picture Soundtrack and Score, which arrives today. While the Cruising soundtrack originally arrived alongside the film's 1980 theatrical release, it will now be hugely expanded, coming via Waxwork as a sprawling 3-LP vinyl set.

In addition to including the full Germs sessions, the reissue comes packing soundtrack legend Jack Nitzsche's original score, in addition to all the other music recorded for the film. This includes tracks by Willy DeVille, the Cripples, Barre Phillips, Mutiny and more.

The release found Waxwork working closely with Friedkin himself for the reissue, as well as Sony and Universal Pictures, which helped unearth the original master tapes.

For the unfamiliar, Waxwork explains Cruising with the following:

Cruising is a 1980 erotic crime thriller directed by William Friedkin (The Exorcist, Sorcerer) and starring Al Pacino and Karen Allen. It is loosely based on the novel by the same name about a serial killer targeting gay men associated with the underground leather and S&M scene in New York City. The production and shooting of Cruising was plagued with protests and petitioning to stop the filming by gay rights activists. The movie was received poorly upon release, however, Cruising has gone to amass a large cult-following and is now considered to be a wildly underrated and thought provoking film that was years ahead of its time. Cruising and director Friedkin unapologetically explored topics that were largely considered at the time to be taboo, noncommercial, and dangerous.

Director William Friedkin's renegade approach at documentary style filmmaking took him to the darkest corners of the underground where his research and discovery of crime, lifestyle duality, and the burgeoning gay leather scene sparked the creation of a landmark film that is a topic of intense conversation and examination to this day.

The Cruising soundtrack reissue will be pressed on 180-gram blue, black and white coloured vinyl. It will include a 12"x12" booklet featuring an exclusive essay by director Friedkin, with the album design and layout coming from Aesthetic Apparatus. All the music within was remastered from the original master tapes.

For a taste of what's in store, you can listen to a sampler featuring a selection of Germs songs from the soundtrack below, where you'll also find the full tracklisting and some more images of the reissue.

The soundtrack can be ordered now over here via Waxwork.

A1. Willy DeVille - Heat Of The Moment
A2. The Cripples - Loneliness
A3. John Hiatt - Spy Boy
A4. Madelynn Von Ritz - When I Close My Eyes I See Blood
A5. Mutiny - Lump 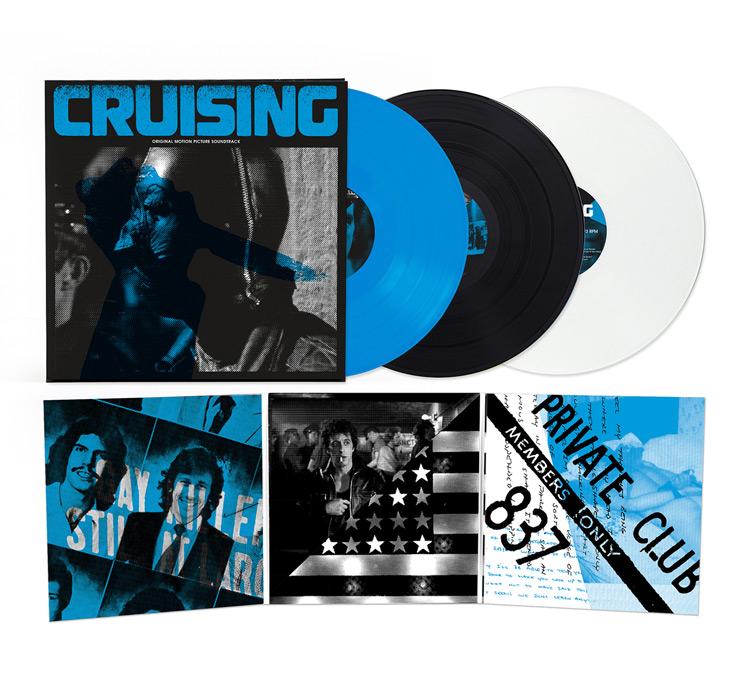