By Josiah Hughes
Published Apr 21, 2016
Disney and Studio Ghibli have been buddied up for a while, with the two companies first joining forces in 1996. Now, however, a Disney artist has us dreaming of the best cross-promotion ever with a mock-up of a My Neighbor Totoro theme park.

John Ramirez is a visual artist whose work has appeared in classic Disney films like Aladdin and The Lion King, but he's also a theme park designer for the mouse house. In other words, he's the perfect person to design this theme park fanfic.

The park's map, which you can salivate over below, features everything from Dad's Office to a Turning Tree to a Disappearing Cat Bus. It really is a dream world for Totoro fans.

Speaking with Kotaku, Ramirez explained that he keeps begging Hayao Miyazaki to build the ride, and he'll keep doing so "until they bar me from the studio or until he says yes!" 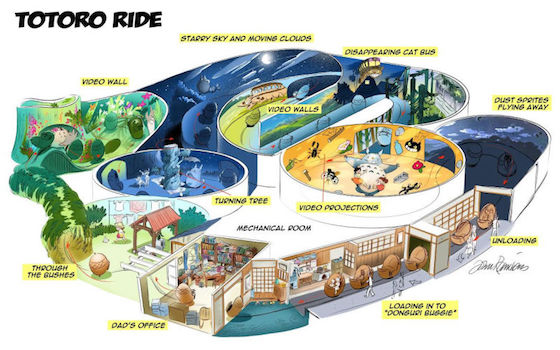