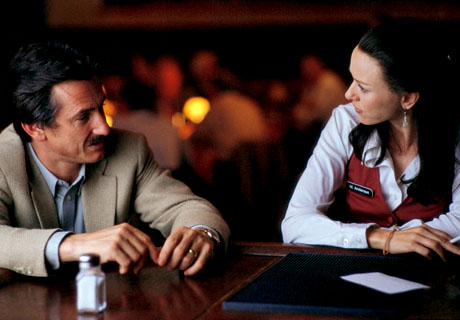 I have no idea how close this film hews to the 1974 events that "inspired" it, but it's a pretty absorbing character study. Samuel Bicke (Sean Penn) is a depressed and oversensitive office furniture salesman who is obsessed with the "injustices" of the world: that people lie to sell products, that criminals like Nixon run the country, and, um, that his wife (Naomi Watts) has separated from him and doesn't want him back. His inability to separate private hurt from public opinions causes him to frequently embarrass himself (as in one cringe-inducing scene with some Black Panthers) and alienate others (as when he harasses his long-suffering ex). But he's occasionally right about the nature of capitalist America, forcing the film to alternate between sympathy for his more lucid ramblings and horror at their narcissistic applications. You're never sure if he's been destroyed or if he destroyed himself; you're caught in a tangle of conflicting emotions as he fails again and again to fit the world into his psychotic measure, and by the time he attempts to hijack a plane (the attempted assassination of the title), you don't know whether to slap him or hug him. The film has its flaws: Penn's performance is a little too obvious in its method austerity, some of the supporting roles are broadly drawn, and Nixon appears to be on television 24 hours a day. But its approach is fairly complex by biopic standards and makes the film more than just a Taxi Driver retread. (Th!nk)